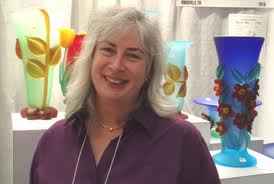 “I work in the vessel format because I enjoy designing and using well-made functional objects. There are many considerations that come into play when I start to work on a new series such as the color palette I will use, the interplay of form and the surface treatment and ultimately how the object will be used.”

Rush earned her BFA at the University of Tennessee and has studied at the Arrowmont School of Crafts. She has exhibited at the American Craft Museum in New York City, the Mint Museum of Craft and Design in Charlotte, and the Kentucky Museum of Art and Design in Louisville. Her work is included in the collections of the Mobile Museum of Art, the Ogden Museum of Southern Art in New Orleans, the Sheldon Art Museum in Lincoln, Nebraska, and the Smithsonian Institution’s Renwick Gallery, among others.