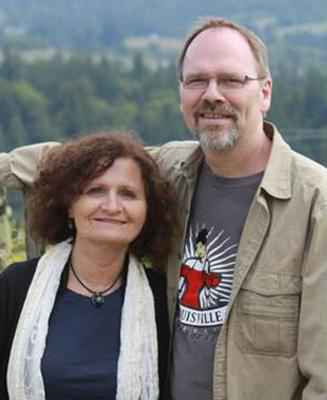 Spooner Creek is the artwork of Michael Macone expressed in clay. He has been making pottery for over 30 years and his work is in collections around the world. Michael grew up in a very creative environment, as his mother was an artist and she encouraged his gift at an early age. In his high school years, Michael was introduced to clay and never looked back.

After attending Layton School of Art in Milwaukee for a year, Michael opened a small clay operation in Minneapolis in a one-stall garage. First, he created novel pottery planters shaped like blue jeans and called the work Klay Klothes. Then, he designed mirrors and vases, sold his work at prestigious art fairs throughout the country, and won many awards along the way. Finally, married with four school age children, Michael grew tired of traveling and searched for another way to market his work.

“That’s when I developed a unique engraving technique that allowed me to etch my designs right into the clay, rather than placing them only on the surface. This gives the work a dimensional quality that can be appreciated with the hand as well as the eye.” This process made it possible to produce a line of high quality ceramic art tiles that could be distributed wholesale. The new line was an instant hit and he called the new company Spooner Creek, which now offers a distinctive assortment of etched ceramic tiles. “We are zealous about keeping the line fresh and relevant. Our current accounts are proof that the line sells well since most of them have been repeat customers for years and years.” In 2002 Michael introduced “The Potter’s Shed” line of earthy clay artwork that he sells at art festivals and to galleries and shops across the country. Michael’s two sons, Miles and Clayton, work with him in their Northern Wisconsin studio.