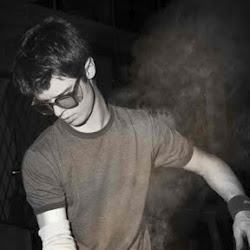 “My current body of work is focused on utilizing new and unusual ways to marry metal with glass. The series draws on personal experiences I’ve had over the years as well as explores the boundaries of glass and metal. The pieces are blown, carved and polished glass, cold assembled to hand fabricated metal armatures as well as sheet metal inlays. I enjoy the honest work each day of creating something completely from my hands and stretching myself to always create something better.”

David Royce began his glass blowing career in 2000 at the age of 15. He served as an apprentice for Tom Rine and Thomas Maras at Island Glass Studios in Minneapolis throughout the rest of high school while also studying studio glass blowing at a local community college. He studied glass art at the University of Wisconsin, River Falls under Jim Engebretson for one year, but after a study abroad program in Taiwan he changed direction and earned a B.A. in child psychology with a minor in Chinese language and literature from the University of Minnesota in 2006.

While attending the U of M, Royce joined Foci: Minnesota Center for Glass Arts, as a studio manager and instructor. There, he re-discovered his passion for glass-making and has been a full-time independent glass artist since 2006. He served on the Board of Directors for the Minnesota Center for Glass Arts while running his own studio in St. Paul, MN.  In 2010 he built his own studio in Little Canada, MN where he works today. He has been a visiting professor at the U of WI, teaching beginning glassblowing, and has taught and provided mentorships at Foci.

He has been awarded Best in Show at the Uptown Art Fair in Minneapolis, MN (2010), has been featured in a public television series on MN artists, and has been included in an American Swedish Institute museum exhibit of American glass artists using Swedish techniques (2009). Most recently he has shown at SOFA Chicago (2012 – 2014) with an international gallery.

His commissions have included work for Target Corporation, Hitachi, as well as many private commissions for sculptural and one of a kind pieces for clients residences.

His work can be found around the country in many fine galleries and his work is collected both nationally and internationally.